US oil producer Denbury to file for bankruptcy protection


Denbury Resources is set to join the pile-up of US oil and gas producers filing for bankruptcy protection following a price crash that has wreaked havoc on the sector.

The heavily indebted producer said on Wednesday it had agreed a restructuring plan with lenders that would reduce its debt by $2.1bn. The Texas-based group will file for Chapter 11 approval of the pre-packaged deal in the coming days.

“The difficult decision to undertake this financial restructuring process follows a comprehensive review of alternatives, and we believe it is an important and necessary step.”

Denbury, which has operations in the Rocky Mountains and Gulf Coast, is the fifth big oil and gas producer to seek bankruptcy protection following a crash caused by coronavirus destroying demand and a Saudi-Russia price war that sent supply soaring.

While many other companies that have hit the wall in recent months have been shale-focused, Denbury specialises in enhanced oil recovery, a process which involves the injection of carbon dioxide into existing oilfields to force oil towards production wells. It had an output of around 56,000 barrels of oil a day in 2019. 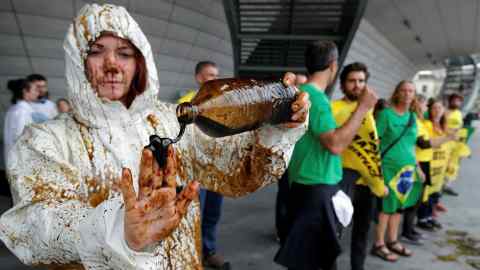 The company’s focus on enhanced oil recovery meant it had higher operating costs than other producers, leaving it exposed when prices crashed — both in 2016 and this year.

“It has been a struggle for the past several years. Not being exposed to the shale play and being a little bit different type of operator made it more challenging to attract investors,” said Richard Tullis, an analyst at Capital One.

Despite efforts to reduce leverage, Denbury has been unable to shake its heavy debt load, which stood at $2.3bn at the end of last year — half of which was due to mature by mid-2022.

The move to file for bankruptcy had been expected by many in the market, after Denbury skipped a large interest payment earlier this month.

The recent price crash has already pushed many highly leveraged US oil and gas companies into bankruptcy with shale pioneer Chesapeake Energy the biggest casualty to date. Twenty-three companies had filed for bankruptcy by the end of last month, according to Texas law firm Haynes & Boone

Eric Rosenthal, a senior director at Fitch Ratings, said Denbury’s filing would lift the default rate in the high yield energy debt over the past 12 months to 15.1 per cent — the highest since March 2017. The rate is likely to reach 17 per cent by the end of the year Mr Rosenthal added, just off the record of 19.7 per cent set in January 2017.

However, if Denbury emerges successfully from the restructuring process, it could be well placed to take advantage of a growing need to reuse carbon emissions captured from power generation, analysts said. Democratic presidential contender Joe Biden has made carbon capture utilisation and storage (CCUS) a core element of his energy plan.

“If they’re able to go through this process and come out with a good bit of flexibility, they may be able to expand their operations and become a bigger player in that arena,” said Mr Tullis. “It does give them a few levers to pull.”

As the US shale boom sent the country’s crude production soaring over the past decade, the oilfield services companies...

By Rachel Adams-Heard and Ellen Gilmer on 8/5/2020 HOUSTON (Bloomberg) --The Dakota Access oil pipeline again staved off what...

Energy bosses cannot usually halve the dividend while promising a long-run decline in oil production and expect to keep...

8/4/2020 WASHINGTON - The United States has an opportunity to accelerate offshore wind energy growth, and benefit from 28...