Turkey and Greece to meet over Mediterranean energy disputes

ANKARA (Bloomberg) –Turkey and Greece will sit down to try to tackle differences over maritime boundaries and offshore energy resources for the first time since 2016.

Diplomats from the two countries will meet in Istanbul on Jan. 25 to begin “exploratory talks,” the Turkish and Greek foreign ministries said late Monday. Greek officials have ruled out expanding the scope of the negotiations to other long-running disputes with Turkey.

The announcement comes just weeks after the European Union pledged to expand the number of Turkish officials sanctioned over the country’s energy exploration in the disputed waters of the eastern Mediterranean Sea. Cyprus, Greece and France this week proposed a list of potential new targets. 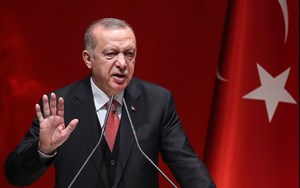 “I believe exploratory talks with Greece will be harbinger of a new era,” in relations, Turkish President Recep Tayyip Erdogan told ambassadors from European Union member countries in Ankara on Tuesday. At the same time, Erdogan urged Greece “to avoid fueling tensions” in the eastern Mediterranean.

Ankara and Athens are locked in a showdown over conflicting interpretations of maritime borders. Competing claims to sovereignty over waters rich in hydrocarbon reserves led to a naval standoff between Greece and Turkey in 2020.

Another thorn in the relationship is Turkey’s continued control of northern Cyprus, which it seized following a coup attempt in which a military junta in Athens sought to unite the island with Greece.

Cyprus and Greece say Turkey’s maritime claims infringe on their sovereignty and have repeatedly demanded that the EU impose sweeping economic sanctions. Such demands have so far failed to win the required unanimous backing of EU member states, many of which fear an escalation that would break the bloc’s ties with Ankara.

Erdogan has in recent months toned down his mostly confrontational rhetoric toward the 27-nation bloc, saying his country wants a new chapter in its relations with the EU. His government also ordered an energy exploration ship to limit its work to an area far from Greek islands through June 15, after the vessel’s operations angered Greece.

On Tuesday, Erdogan urged the EU to honor its promises to Turkey, including updating their customs union and waiving visa requirements for Turkish citizens. He also called on the bloc to update a 2016 deal by which Turkey stemmed the flow of migrants toward Europe in exchange for financial assistance.

The weeks leading up to the negotiations will see some heightened tensions. A senior diplomat in Brussels said Cyprus, Greece and France this week jointly presented a list of other Turkish officials they’d like to see sanctioned over their country’s drilling operations off the coast of Cyprus.

The blacklist so far includes only two people and has no material consequences for Turkey’s economy. EU officials will start debating the proposed additional listings next week, though it’s unclear whether the latest push will fare any better than previous attempts.

Opec and Russia agree to raise oil supply from January

Global oil demand will be lower in 2021 than previously expected, the International Energy Agency said on Tuesday, as...

The firm intends to focus on other assets which are seen to have strong near-term development potential Mosman Oil...

“We are on the cusp of our inaugural gas sales,” said chief executive Paul Haywood () has told investors...

Total has acquired a 20 per cent stake in Adani Green Energy in a $2.5bn deal that deepens the...

US Gas-Fired Power Generation Set For First Drop Since 2017

ICS Calls for Vaccine Priority for Seafarers and Frontline Workers