Tullow Oil is to focus on its core assets in west Africa as part of a plan to boost cash generation and secure the troubled energy group’s future.

The company, which in September warned it could default on its debt if it did not address a potential liquidity shortfall, has told shareholders it expects to be able to generate $7bn of operating cash flow over the next decade.

Of this, $2.7bn will be invested back into the company, predominantly on recovering as much as possible from the oilfields in Ghana that form the backbone of its business.

The remaining $4bn will go towards servicing its $2.4bn of net debt and shareholder returns. There will also be a “rigorous” focus on costs, the company said on Wednesday.

Its cash flow forecasts are based on oil prices of $45 per barrel in 2021 and $55 per barrel from 2022 onwards. Oil prices yesterday reached their highest level since March, at one stage surpassing $48 per barrel, boosted by optimism over coronavirus vaccines.

Shares initially rose on the announcement on Wednesday morning but were down nearly 4 per cent by mid-morning in London.

David Round, analyst at BMO Capital Markets, said the cash generation outlined by Tullow was bigger than expected and “would go a long way towards addressing the market’s funding concerns” assuming it could be delivered.

However, Mark Wilson of Jefferies said his initial view was that a focus on costs “combined with mature oil-producing assets with an established track record of gradual decline cannot be turned around to medium-term production growth” as the company had set out.

Tullow’s new chief executive Rahul Dhir is trying to revive the company after a tough 2019 that culminated in a dramatic cut to its production forecasts, the departure of his predecessor Paul McDade and the suspension of the group’s dividend.

Mr Dhir, who joined in July from rival Africa-focused oil and gas group Delonex Energy, said there had been “historic under-investment” in the company’s core assets in Ghana, where it operates the Jubilee and TEN oilfields, as the company sought to be “all things to all people”. 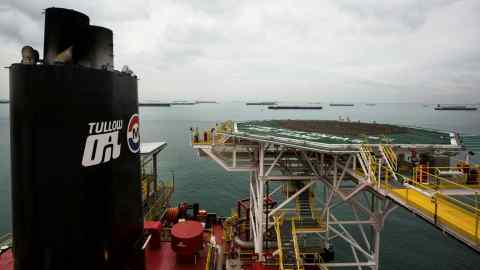 Shareholders were also disappointed last year when two significant discoveries in waters off Guyana turned out to contain heavy oil that would be harder to commercialise.

Tullow expects to start a multi-well drilling programme in Ghana in the second quarter of next year. It believes it has plenty of scope for further production in the country. It has produced 400m barrels of oil from an estimated 2.9bn barrels from its assets there.

The company recently sold its stake in a project in Uganda for $575m to France’s Total to help pay off debt. It has not ruled out further disposals but said “there is now less urgency to sell additional assets”.

While the focus of most of its spending will be on west Africa, Mr Dhir insisted Tullow still believed it had “opportunities to unlock value” elsewhere, in Kenya and South America that would “not require significant capital investment in the evaluation phase”.

Global oil demand will be lower in 2021 than previously expected, the International Energy Agency said on Tuesday, as...

The firm intends to focus on other assets which are seen to have strong near-term development potential Mosman Oil...

“We are on the cusp of our inaugural gas sales,” said chief executive Paul Haywood () has told investors...

Total has acquired a 20 per cent stake in Adani Green Energy in a $2.5bn deal that deepens the...

Investors Are Pulling The Plug On Argentina’s Prized Shale Play

Are natural gas producers’ best days behind them?

US Gas-Fired Power Generation Set For First Drop Since 2017

ICS Calls for Vaccine Priority for Seafarers and Frontline Workers