Tracking the Environmental Impact of the Oil and


With the energy transition gaining pace, several exploration and production (“E&P”) companies have adjusted their business models; both to reduce emissions and to mitigate climate-related business risks.

E&Ps may be grabbing the headlines regarding the oil and gas industry’s response to the energy transition, but the core of their supply chain – Oil Field Services (“OFS”) companies – are also responding by setting carbon-reduction targets. The lack of common reporting standards is hampering the ability to track progress, however.

Baker Hughes’ targets are most ambitious, aiming for net-zero by 2050, alongside Schlumberger which is targeting an interim 30% reduction in emissions by 2025.

Furthermore, Schlumberger is the only Tier-1 OFS to support the Task Force On Climate-Related Financial Disclosures, suggesting that emissions reductions are a priority. Halliburton and Weatherford are yet to publish specific Scope 1 and Scope 2 emissions targets.

As OFS firms are contracted to complete discrete work scopes (whereas E&Ps hold responsibility for the full lifecycle of projects) it may be more difficult for OFS firms to make absolute scope 1 and 2 emission reductions; potentially explaining why some OFS firms declined to publish targets. Tier-1 OFS companies have so far shied away from commitments to reduce Scope 3 emissions (supply chain & customer emissions), as these are typically more difficult to influence and measure. 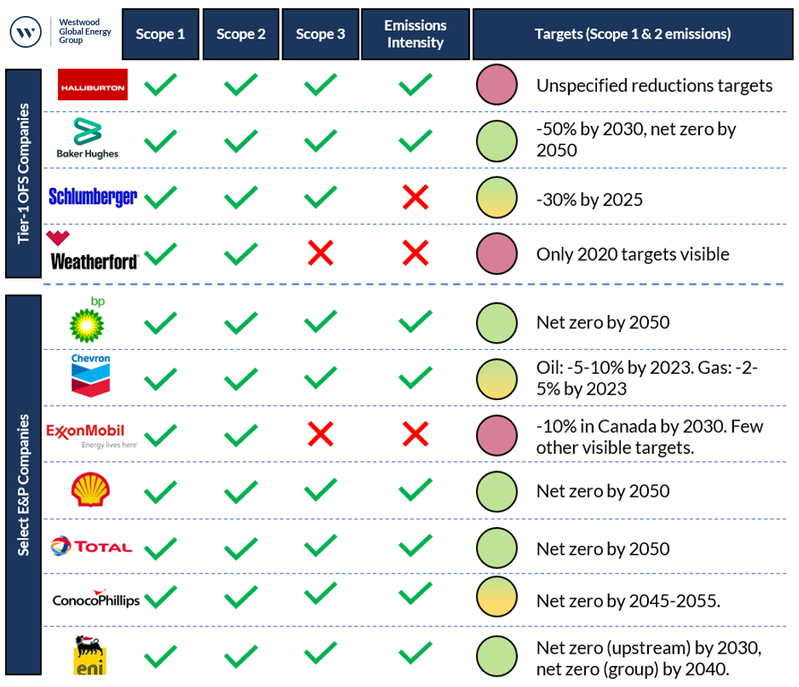 Most of the largest IOCs provide comprehensive emissions reporting. ExxonMobil is the only one of the seven assessed E&P companies to not disclose Scope 3 emissions or overall emissions intensity.

The OFS sector has followed suit with Halliburton, Baker Hughes, and Schlumberger publishing annual emissions. Weatherford is relatively less transparent, with Scope 1 and Scope 2 emissions only published to 2017 via a 2018 Carbon Disclosure Project report.

Progress and the comparison conundrum

There is debate as to whether Scope 1 and Scope 2 emissions should be compared on an absolute (total emissions) or normalized basis (which offers insights into efficiency and intensity of emissions) – see Figure 2.

Inconsistent environmental reporting standards (e.g. the proportion of facilities included) mean that performance benchmarking is difficult and trends should be treated individually for each OFS company.  The oil and gas sector would benefit from a unified set of reporting procedures and standards.

Baker Hughes reported a c.55% reduction in Scope 1 and Scope 2 emissions per $m of revenue over the period 2016 to 2019. Revenue grew by 82% over this period whilst absolute emissions fell by c.15%. This shows a clear trend of lower emissions intensity in operations, which has been driven by an expansion of low-carbon technology solutions (including gas turbines and flare monitoring technologies) that aim to use less materials and can be deployed faster than conventional technologies.

Weatherford reported a 20% reduction in Scope 1 and Scope 2 emissions for both absolute values and those normalized for revenue. Data only covers 2016 to 2017, making it difficult to identify long-term trends. Emissions reductions may be less of a focus for Weatherford, as it had the lowest absolute emissions of the Tier-1 OFS group in 2016 & 2017.

Conversely, Schlumberger reported growth in Scope 1 and Scope 2 emissions (25% absolute, 6% normalized for revenue) over the 2016 to 2018 period.  It has subsequently reported that 2019 emissions fell by c.22%. The drivers of this improvement in 2019 are unclear.

Halliburton is an outlier showing a c.140% rise in Scope 1 and Scope 2 emissions between 2017 and 2018. Much of this rise is due to reporting changes, with figures from 2018 onwards covering a greater number of Halliburton’s facilities, and emissions from heavy equipment. This again highlights the challenges associated with emissions benchmarking in the absence of universal emissions reporting standards.

Big strides have been made in terms of both setting objectives and improving environmental transparency, but there are laggards. Weatherford lags its main Tier-1 OFS peers on both metrics, and many smaller OFS players not reporting any metrics.

Benchmarking performance and tracking progress towards these targets is going to be difficult, however, as common reporting standards do not yet exist.

Oil price: I do not think you will see another round of negative oil price: Jim

The number of drilling rigs operating in the U.S. surged this week after crude prices crossed the $50 milestone....

Big banks, climate activists and banking reform advocates don’t agree on much, but they joined forces to denounce a...

President Donald Trump's legacy will forever be defined by the massive failures he presided over in the final weeks...

Oil price: I do not think you will see another round of negative oil price: Jim

This Is Why MRO Stock Still Has Much Farther to Fall