Saudi FDI up in first half of 2020 as economy shows resilience, minister says By 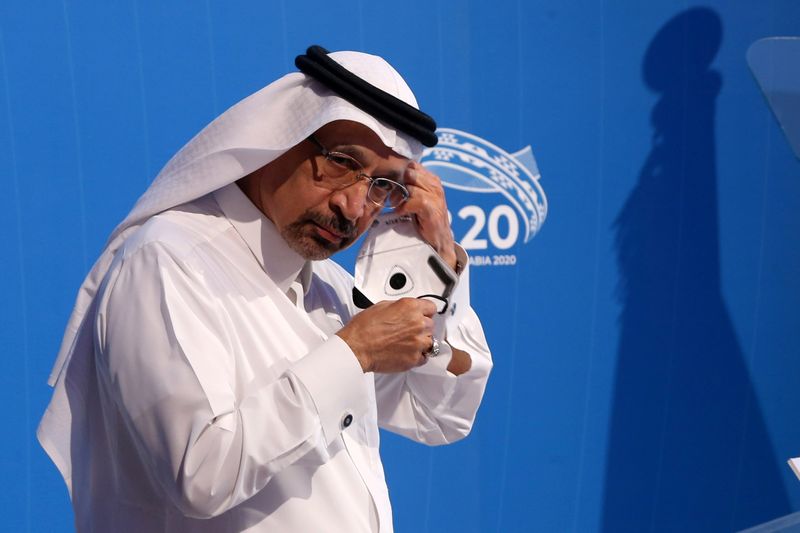 © Reuters. FILE PHOTO: Saudi Arabian Investment Minister Khalid al-Falih, adjusts a mask as he attends a virtual meeting of B20 at the Saudi Business Group summit in Riyadh

RIYADH/DUBAI (Reuters) – Saudi Arabia’s Minister of Investment Khalid al-Falih said on Saturday foreign direct investment (FDI) increased by 12% in the first half of 2020 compared with the same period last year.

The Saudi government, which is hosting this year’s G20 summit, has made attracting greater foreign investment a cornerstone of its Vision 2030 plan to diversify the economy of the world’s largest oil exporter away from oil revenues.

“I’m glad to say that FDI, my area of focus, in the first half has been reported to increase by 12% compared to last year,” Falih, who previously chaired state oil company Saudi Aramco (SE:), told a G20 conference.

Falih said in September the kingdom had experienced a slowdown in FDI this year due to the global disruption caused by the COVID-19 pandemic.

“When I mentioned the 12% increase I wanted to assure people that there was no decline, our FDI target is much higher,” Falih said on Saturday.

In addition to attracting higher investment volumes, it will focus on “qualitative growth”, he said, mentioning areas such as cloud computing, renewable energy, tourism, culture, entertainment, and logistics.

“These investments may have lower investment volumes but higher impact on the economy.”

Saudi Arabia is chairing a two-day summit this weekend of leaders of the 20 biggest world economies, who will debate how to deal with a pandemic that has caused a global recession and how to manage the recovery once it is under control.

Falih said the Saudi economy, which has been hit by the double blow of the pandemic and lower oil prices, had shown resilience this year and had a proven ability to withstand shocks.

Disclaimer: Fusion Media would like to remind you that the data contained in this website is not necessarily real-time nor accurate. All CFDs (stocks, indexes, futures) and Forex prices are not provided by exchanges but rather by market makers, and so prices may not be accurate and may differ from the actual market price, meaning prices are indicative and not appropriate for trading purposes. Therefore Fusion Media doesn`t bear any responsibility for any trading losses you might incur as a result of using this data.

Fusion Media or anyone involved with Fusion Media will not accept any liability for loss or damage as a result of reliance on the information including data, quotes, charts and buy/sell signals contained within this website. Please be fully informed regarding the risks and costs associated with trading the financial markets, it is one of the riskiest investment forms possible.

Mairo Cinquetti/NurPhoto/Getty Images GameStop soared as much as 22.8% on Thursday as more short-sellers closed positions and ran for...

Investors Beware! These Energy Stocks Could Go Bankrupt in 2021

Energy stocks had a rough year in 2020. Oil prices went negative for a brief moment and demand is...

What can Crude Oil Builds, Futures, and Stock Crashes tell us about the Global

Is The Oil Rally Coming To An End?

Everything You Ever Wanted to Know About Privacy Coins

With oil revenue down, North Dakota approves budget forecast as legislators hope for

WTI Futures Fail To Hold Around One Year High