Many, if not most, vaping oils do not contain water as any of its ingredients, according to Emily Uhlenkamp, of the Webster County Public Health. For many products, like the one pictured, vegetable oil is the main ingredient.

Editor’s note: This is the third in a series of stories that explore the impact of vaping on the community.

Those are some of the symptoms of severe respiratory illness associated with vaping, or use of e-cigarettes.

As vaping, an alternative way to inhale nicotine products, has become more and more popular among various age groups, the number of acute lung injury and respiratory illnesses has also increased. 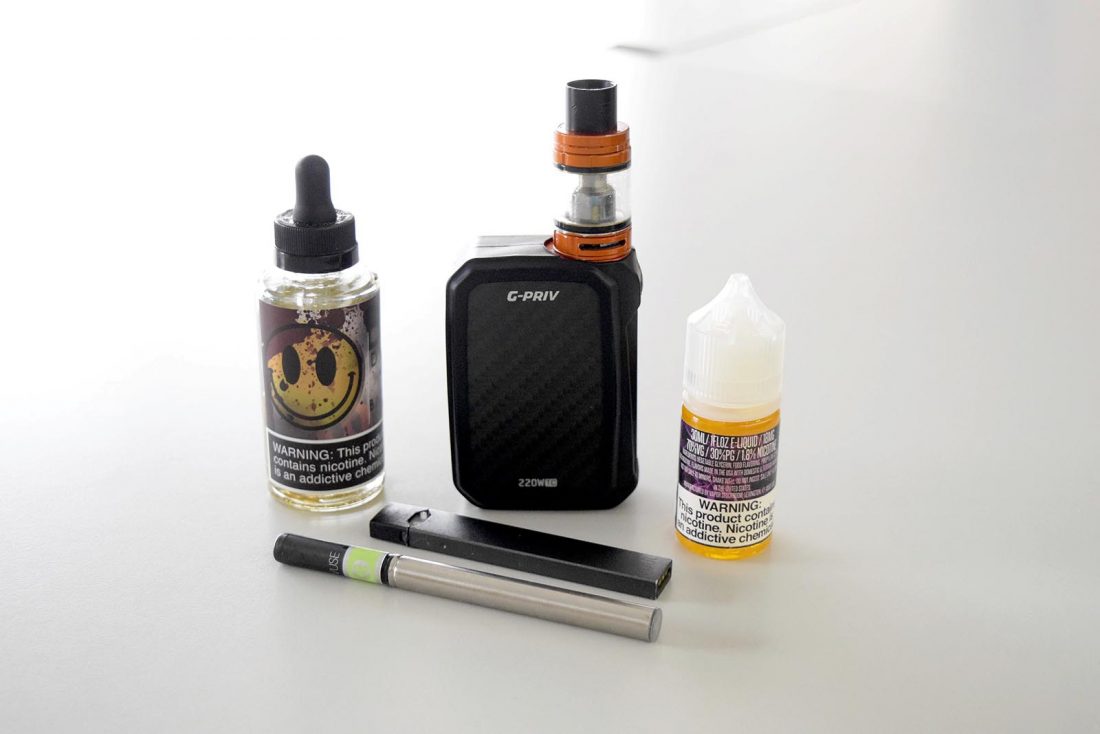 There are countless different types of vaping devices and oils available for purchase. While some vaping devices are larger and more obvious, many are smaller and look like pens or USB drives.

According to the Iowa Department of Public Health, as of March 11, there have been 60 confirmed and probable cases of severe lung disease associated with vaping since Aug. 30, 2019. Of those cases, 46 reported using illicit THC vapes.

Kelsey Redmond, an advanced registered nurse practitioner at the UnityPoint Health Clinic Family Medicine – Second Avenue North, said that while there haven’t yet been any known lung injuries or respiratory illnesses due to vaping reported in Webster County, UnityPoint Health providers are taking the risks very seriously and talking to their patients about them.

“I’ve started now asking about not just smoking, but if they’re vaping or anything like that,” Redmond said.

She said she’s had patients tell her they’ve switched from smoking cigarettes to using vapes because “it’s better.”

“I think people are just making the switch because they think it’s a healthier option, and it’s not,” Redmond said. “It still carries the same risks and concerns.” 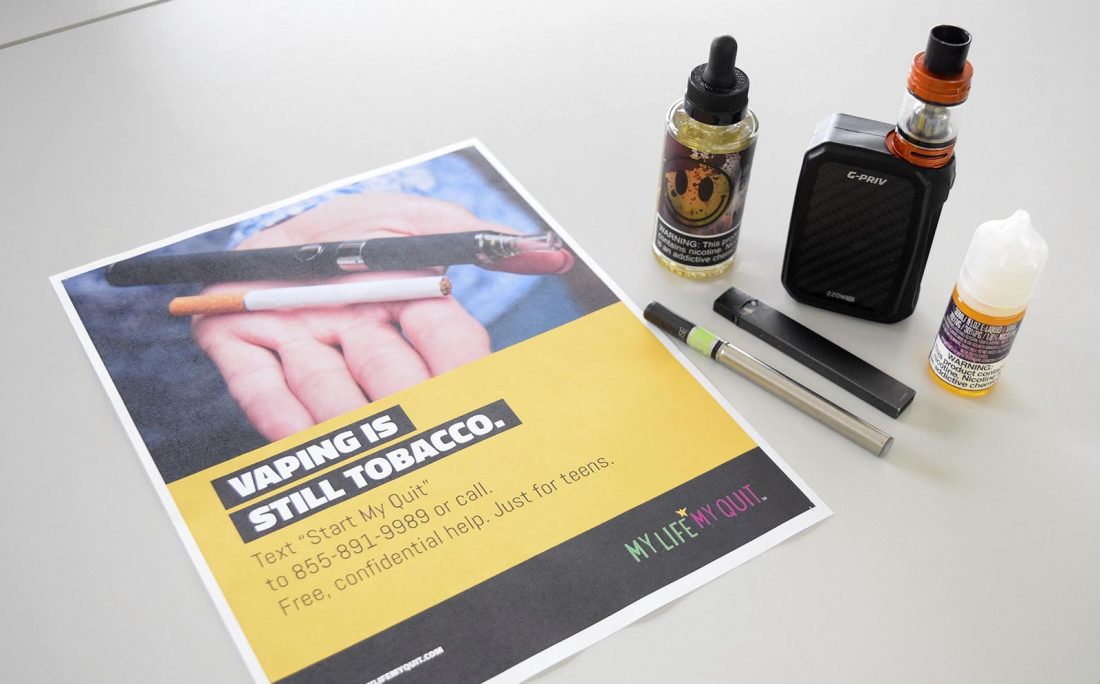 Webster County Public Health has resources to teach about the risks of vaping and ways to help teens stop vaping.

Many people think the smoke from vaping isn’t hazardous to others, like secondhand cigarette smoke is, but Redmond said that isn’t the case.

The flavors available for vaping products also draw users in, including younger teens. Vaping also doesn’t have the “stigma” carried by cigarette smoking, she said.

Despite seeming more attractive and less noxious than smoking cigarettes, vaping products are still nicotine and many vaping cartridges have more nicotine than a pack of cigarettes.

“It’s still going to cause lung injuries, it’s just a matter of when,” Redmond said. “It still has cancer-causing agents. It has heavy metals. It’s still nicotine, which is addictive. And it doesn’t just hurt your lungs — it’s your heart, your whole body, it hits every organ.”

Vaping is especially dangerous for teens and young adults as it inhibits brain development, and the brain doesn’t stop developing until age 25.

“Although the short-term and long-term effects of vaping are still being determined, we do know that vaping is addictive and dangerous,” is the UnityPoint Health official statement on vaping. “There is currently no regulation on the ingredients used in the nicotine, which can make it difficult to determine vaping’s potential side effects. We strongly encourage parents to talk with their teens about vaping’s health risks and the dangers of e-cigarettes.”

“Vaping is bad for your heart,” he said. “The truth is people who vape are 56% more likely to have a heart attack than non-smokers, and 30% more likely to suffer a stroke.”

Vaping endangers the heart by causing cholesterol deposits in arteries to become unstable and lead to clot formations in blood vessels, which may lead to heart attack or stroke. Vaping also causes a spike of adrenaline and increased blood pressure and heart rate.

E-cigarette use can also cause stiffness in arteries, which is a contributing factor to heart attack and stroke, Sharaf said. Vaping can also negatively affect normal blood clotting function.

Emily Uhlenkamp, a developmental specialist for Webster County Public Health Department, is the resident vaping expert at WCPH, educating the community on the health risks of vaping and vape products.

Uhlenkamp has also noticed in her interactions with various groups in the community that many people who vape do so because they think it’s a safer alternative to cigarette smoking, or because they are using it as a smoking cessation tool.

“Studies have shown that most people are dual users,” she said. “It does not work as a cessation device.”

Because of the nicotine vape oil being concentrated into a smaller device than a pack of cigarettes, it’s hard for users to know just how much nicotine they’ve consumed.

“A lot of people are consuming a lot more nicotine than they actually realize,” Uhlenkamp said.

Uhlenkamp said other symptoms of respiratory illness due to vaping can be nosebleeds, because the user’s airways “are super dry.”

“If they take a hit off of one of these and they feel a burning sensation, that’s usually a good indicator that they shouldn’t be doing it, but also that something is not right with their airway,” she added.

Vape users experiencing any of the symptoms listed in this story should seek medical attention right away, Uhlenkamp said.

One of the most common misconceptions about using vaping products, Uhlenkamp said, is believing that the user is only inhaling water vapor.

“I say that the term ‘vape’ isn’t the correct terminology,” she said. “What actually happens when you put the oil in the device is it’s actually aerosolized — it’s not a vapor, it’s aerosolized oil and you’re inhaling heavy metals, ultrafine particles, oils, just things you probably should not be breathing.”

In fact, many, if not most, vape “juices” don’t even include water in their ingredient list. Instead, vegetable oil is often the first ingredient.

The fact that the vaping industry isn’t well regulated increases the risks to users, Uhlenkamp said.

“It’s hard for people to make informed choices because it’s not well regulated,” she said. “It’s hard to know what everything means.”

While Uhlenkamp encourages vape users to do research before using anything, she realizes sometimes it doesn’t make a difference.

“The fact that they have the information and they are choosing to ignore it and still do it is slightly scary to me,” she said.

Today’s breaking news and more in your inbox

This column is an opinion from Dr. Michelle Corfield, Jennifer Turner, Dr. Harrie Vredenburg and Liana Wolf Leg, all with Project Reconciliation....

The economic repercussions of the COVID-19 pandemic have forced governments around the world to resort to massive spending in order...

Dreams of a swimmable False Creek have been dashed again with pollution levels hitting highs four times, since May, above...

Saunton Sands Hotel in Devon, UK, has completed a £2m expansion of its spa and wellness facilities. The upgrade...

Efforts to raise the sunken and overturned George H. Ledcor tugboat on the Fraser River are taking longer that expected,...

Houston’s Future As The Energy Capital, And Observing Ramadan At Home (May 13, 2020)

Could Opec+ become a victim of its own success?, Energy News, ET EnergyWorld